A View of Reality

When Sly and the Family Stone released their hit song Stand! in 1969, it enriched my self talk toward accepting a clearer view of myself and personal beliefs.  The understandable controversy centered on the Colin Kaepernick’s decision to take a knee during the USA National Anthem reminds me of the lyrics to STAND!

I fully agree to take a knee during the Star Spangled Banner national anthem because it is an expression of the 1st amendment.  A major protion of those who oppose takng a knee embrace the US Constitution’s 2nd amendment despite the mass killing used from the right to bear arms, then surely a patriotic expression of free speech in taking a knee fully qualifies as all American.

Traditionally, men take a knee to propose marriage to their special love.  We take a knee to be knighted by the Queen.  Kneeling is customary in several religious rituals.  So, at this point I find the act of taking a knee during the most patriotic gesture of a union gather to be most fitting.  I think we should look at employing a time of grace and bow before the great war model anthem.

Like Sly and Family sang, “In the end you’ll still be you – One that’s done all the things you set out to do.  Kaepernick and all of those who are taking his lead and conducting the same act of taking a knee acknowledges that our nation continues to perpetuate discriminatory acts against others.  Police brutality on black people base on color and the history of enslavement and Jim Crow laws requires attention.  Kaepernick’s  so called act of defieance to me looks like a more devoted act of reverence to the belif that this country will carry a better mission if only it is given the chance to recognize its wrong doings.

Kaepernick has brought the situation to the front of the line, because in contrast he could have stayed in the locker room during the national anthem and no one would have been the wiser, and consequently no discussion or perceivable solutions toward injustice would be forthcoming.  He has paid a price for his action, but their were many in the fight for equality who have suffered even greater blows.  in the USA Nat Turner, Gabriel Prosser, and Denmark Versey were all murdered by the oppressors they sought to change.  James Chaney, Samuel Younger, Jr., Vernon Dahmer, and the Reverend George Lee, Addie Mae Collins, Denise McNair, Carole Robertson, Cynthia Wesley, Virgil Lamar, Medgar Evers, and Martin Luther King, Jr. were all murdered by white racist opponents of equal opportunity.  These were blacks, but even whites like the great John Brown, Andrew Goodman, Michael Schwerner, Viola Liuzzo, Reverend James Reeb and Paul Guihard were murdered for driving home the point that blacks deserve to live in harmony.

Sly and the Family Stone sung that “There’s a cross for you to bear – Things to go through if you’re going anywhere – For the things you know are right – It’s the truth that the truth makes them so uptight.  The them that Sly references are oppressors, and those that want to keep others from enjoying the fruits of society.  Essentially, “All the things you want are real – You have you to complete and there is no deal – You’ve been sitting much too long –  There’s a permanent crease in your right and wrong – There’s a midget standing tall
And a giant beside him about to fall – They will try to make you crawl – And they know what you’re saying makes sense and all.”

Removing your hat during the Anthem is optional for women, but not for men at major sporting events.  Look at the Kentucky Derby where thousands of women do not in the least feel it appropriate to remove their hat during the national anthem.  Some believe it appropriate to place their right hand over their heart during the war model song.  In short, the USA citizens do not know the truth about what a patriotic appearance looks like.  There are those that believe it is okay to wear US Flag apparel, and the truth is that any misconfiguration of the US Flag is wrong.  The flag is not to be altered into fashionable wear such as to make some cowboy boots and walk around as though you are the most patriotic member in the group.  The flag is designed in its entirety and any deviation from its completeness is prohibited, but yet the unauthorized practice of flag misalignment is accepted in general society as being overtly patriotic.

There used to be some problems with it during the 1960’s when the hippie movement was larger and in-charge and those that did it then mostly did it to call attention to the unjust war activities in Viet Nam.  Eventually, we all got it that Viet Nam was a mistake and everyone who spoke out against that war was forgiven or not held on a type of violators’ list for a long period of time.

Sly and the Family Stone spoke truth in saying “Don’t you know that you are free – Well at least in your mind if you want to be – Everybody Stand!”  By taking the knee you are standing against all of things that you believe to be free and are not.  You are standing when you take a knee for civil rights and the things that come from a free society.  Take a knee if you want to stand for equal liberties and that everyone should be afforded the assurance the freedom rings with liberty and justice for all. 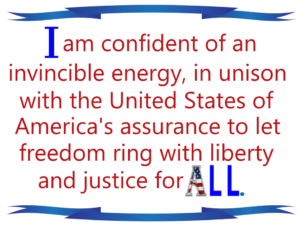